Highlights of the first AMA Session with RollerCoin team 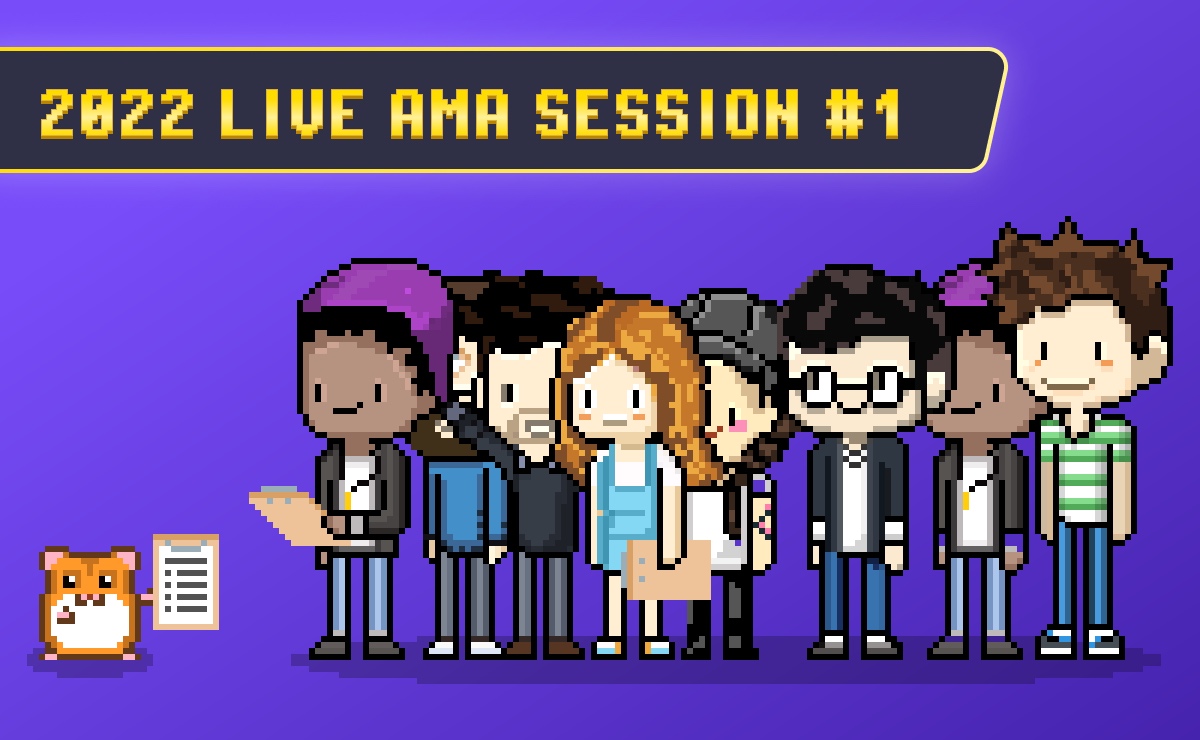 Few days ago we held our first AMA Session on Discord hosted by Roller Admins! 🐹

We want to thank everyone who participated 🤝 there were so many deep, thought provoking questions, that we barely had enough time to answer all of them! 🤓

If you missed it, no worries. We collected the best parts for you right here 👇

Questions and suggestions about the upcoming features 💫

❕ For now we’re patiently waiting for the Marketplace to hit, we really want to shift more towards a player driven economy, and purchasing and selling stuff on the new Marketplace will definitely help. Basically you can expect to have more sources of income besides the block reward it self 👍

❕ No plans to add more rooms for now (because that will increase Network power even more, so we decided to add Merge to help players save more places for miners).

❓“When will the miners be merged to two stars” @Prolli

❓ “¿Will it be possible to send coins in different networks?” @Webo

❕ This will happen, but there are no exact dates yet.

❕ We thought of this one and we really think it’s a fun idea but we’re afraid that this might be abused by many, that is why we don’t have Unlimited or Multiplayer versions of our minigames.

❓ “Are we gonna be able to exchange our coins for other coins inside RollerCoin. Like exchanging my mined Polygon for BNB ?” @ufoguy

❕ This might happen someday, but as of right now we cut everything to prepare the Marketplace. This is our main focus right now, that is why we scrapped some ideas that we initially had for S4.

❓“When will we be able to send RLT to other users INTERNALLY? Would be super coool!” @⎛⎝ THINK-TRONIK ⎠⎞

❕ Unfortunately we can’t add this function due to the fraudulent activity that may appear in this case.

❓ “Regarding what a number of us have brought up about Rollercoin listing RLT on Binance and Coinbase, not to mention many others that would like to have 2,000,000+ Rollers and RLT on their exchanges, would you be able to handle the influx of new members should a tidal wave of them come join? Popularity never hurts in achieving exchange listings, so do you believe the longer you wait, the more members we have, and thus the more the exchanges will come to RC requesting you join and on very favorable terms, even at no cost to Rollercoin? Many exchanges participated in the Flare airdrop, for example, due to its popularity and expectations for it. Will you look at this? A lot of us merged all our miners two for one that we had, and assumed we will be able to deconstruct our merged miners to create a 2-star triple miner. I had a set of ten miners that I made into 5 doubles, but I could make that 1, 2, 3 and have 2 extra doubles to create a 4-miner monster when that option is available. That way in Season 5 I can have 1, 2, 3 and 4 of them, which is the ten, in that array.” @MarketMaven

❕ Thank you for the questions! Our plans on listing the RLT on Binance and/or Coinbase rely on the success of the upcoming Marketplace. In case of successful transition to a player driven economy, where free players can earn mostly by selling parts, and paid players will earn from having a lot of miners that will generate passive income, basically the same as we have right now but on the whole other level. As for the upgrades of miners, we intentionally disabled further upgrades for a few reasons. First, we really want to keep the core purpose of collecting parts from playing games. Second, we have plans to add more stats to existing miners, for example: “Additional Reward in DOGE per each block” or something similar.

❓ “When will the market be released?” @Elzarek

❕ With the start of Season IV 💯

❓“How expensive will we sell in the marketplace? And will we have to pay fees for buying or selling there ?” @pos aqui estamo

❕ Players will set prices for miners on their own. There will be fees for the deals on Marketplace also, we will announce all the details with the release of it.

❓“Can we sell parts on the Marketplace or miners only?” @Zverak

❕ Of course, you will be able to sell both Parts and Miners 😉

❓“ Will the items be sold to crypto or rlt in the market?” @Elçin

❕ Players will be able to use most of the cryptocurrencies available in the game right now to make purchases on Marketplace.

About current features and gameplay 🕹

❓ “What parameter influences the mining block speed for an exact crypto, like matic average duration is 14 min but the btc and eth average time are 10 min.” @Lencsi

❕ High changes in Network Power of newer coins, such as BNB and MATIC, can cause them to increase the time of each mined block. This happens because we are dealing with an actual blockchain. It will become 10 minutes once again once the Network Power for each of them becomes pretty much stable.

❓ “Have you ever had thoughts about adjusting games winning power based on difficulty, cause right now some games feels hella unfair to play” @Incognito Mode

❕ We adjusted some games to give less power intentionally. Some games are easier to be played by bots and those usually will give less power. Ideally they would give the amount of power proportionally to the time spent on the game, but unfortunately that is not the case.

❕ Bug that happens on higher levels of difficulty, we will fix this in one of our future updates.

❓ “In the weekly offers in sales and popular the miners are sold out within hours.. Will we see the same miners again in the offer? Thank you” @elBuho

❕ Yes, some miners will appear in the Weekly Offers again, so you still have a chance to get your favorite one.

❓ “Hello, I wanted to give a suggestion that can make rollercoin more entertaining. I suggest that environmental sounds are implemented such as the sound of miners working, adding sounds to the minigames. Thank you for reading” @🇪🇦 Teorox

❕ Veteran players remember that we had sounds in the game earlier, but we decided to remove them entirely because most players just mute them.

❓ “How do you go about spotting spam accounts / repeat users using different email headers for the sake of completing quests and ban all of them permanently?” @vaizardboy

❕ We ban them all. Permanently.

❓“When can I build a miner just from parts?” @Hoonigan

❕ It’s not possible. Parts are special items which you need for merging, but you also need miners to do that.

❓ “Is there gonna be a reset game time like 0 trophy and game at 00:00 UTC ? The cooldown game within 24 hours is kinda make the game time different each day by large part” @DestinyDay

❕ It drops the difficulty once every 1-2 hours so the timezone doesn’t matter. Imagine playing on lvl 8 and suddenly you have lvl 1 once again. Brutal. The same goes for the cooldown, just wait for a little and your cooldown will get lower.

❓ “Hello. When I complete the tasks, do they disappear, or what happens to them? It would be great if the completed just disappear when U have them complete.” @DasMachtSpass999

❕ If you click and start the task, you will get paid for completing it. Doesn’t matter if it was updated or disappeared later on.

❓“Why are you making this game more of a grind fest each season? Season 1 we only need to play 150 games/week now it’s 100 games/day. You say it yourself this game is for fun while earning not a job” @ZeroL

❕ Season 3 is much cheaper and contains more rewards compared to Season 1, so players need to make more effort to receive them.

❓ “Can the pass have more f2p stuff for better advance?” @Talo

❓ “Hey RollerCoin! In an earlier post you stated that you don’t want your game to become or feel like a job. Yet, all your events and promotion material urge players to spend more and more time on the platform. Furthermore, you seem to favor high rollers that spend big money rather than give helpful tools and boosts for starting players. Will this issue be addressed in the near future??” @Melca

❕ The whole Marketplace, Parts and Merge ideas are here to address this big elephant in the room. We can’t always increase block rewards, that is why we would like to introduce more and more alternative methods of income.

❓ “Why did the difficulty scale up on the pass so much? We now have to clear around 3x the games and 7x the invites to clear the pass entirely, AND buy a lootbox nearly every day to stand a chance at clearing level 30 on the pass, or even getting close.” @dubbz82

❕ It was designed like that so you could either get lootboxes and invite referrals, or get all rewards right here right now which would be even cheaper, the choice is yours

❕ We will announce it soon 👌

❓ “Will there be a 4 year anniversary miner?” @Shreyas

❕ Only time will tell (probably yes).

❓ “What is the next game project?” @Danang_aprias

❕ For now we’re focused on releasing and supporting the Marketplace. We really hope that it will be a huge success that will shift the game to a new direction that we will continue to develop.

❓ “Do you intend to continue doing seasons, or after season 4 is it just major events (like xmas etc)” @HaGolem

❕ We will definitely continue doing seasons.

❓ “Is there any plan on making RollerCoin an nft project ?” @Switch

❓“From 2 million users how many are active in the last season per day? Is the number increasing?” @Hroddz23

❓ “What is the dev team’s background? The website is well done and it runs really smoothly. Are you a secret celebrity? Are you Elon Musk?” @WafflesTheGoodBoy

❕ I’m not a man but cute pixelated hamster 🐹

That’s all for today, hope you liked it 😉